The Voices You Give Your Attention to Is You... 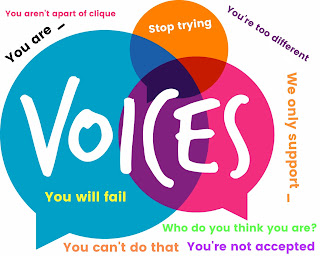 This post is inspired by an incident I had a few days ago...

I was called a nigger by a complete stranger.

That wasn't the most impactful part. It's what I did afterwards that inspired me to write this post.

I was tired and so I needed to sit down at a train stop. I went to sit next to a white man that had the only empty seat available.

After sitting the white man got up and grumbled something under his voice.

I was sitting there happy to have been tired from a long day of continuing to build my dream that is Curva-Lish when a young black man came over to me and said, "Did you hear what he said to you?"

I responded, "Who said what?"

I literally didn't know what he was talking about.

The young man, with a face of complete horror and anger, said, "That man just called you a nigger!"

I first started laughing, which made this young man's face turn to complete astonishment.

I calmly replied, "He for sure wasn't talking to me because I'm not a nigger."

I then lean in and look the young man straight in his eyes and say, "Don't ever respond or give attention to voices that don't describe who and what you are. Ever. Someone's always going to have an opinion of you. What you respond to is a reflection of you acknowledging it. Choose what you acknowledge because that means it's you."

In other words, don't ever accept a label or identification that you haven't authorized as who you are. Period.

Someone's opinion of you doesn't equal facts unless you accept and give attention to it, thus, making it a fact.

The young man looks at me and tears welled up in his eyes.

I give him a nod and hop on my train that just pulled up.

One thing I have gleamed from my years on this Earth is that no matter how accomplished, successful or perfect someone's life appears, what matters the most is the voices they choose to acknowledge.

No matter whether it's internal voices telling you you're not good enough or you lack some type of specialness...responding and giving attention to those voices is a reflection of who you think you are.

And like the experience I had above, what about those external voices saying you're this or you're that?

Whether the voice is internal or external, if it doesn't reasonate with who you think you really are deep down, then do not respond or give it your attention!

We all have competing voices telling us many things both internally and externally.

The key is in how you respond or what you give your attention to when those voices come up!

There are many, many opinions but at the end of the day, your voice and how you respond to divergent opinions that contrast your own is what makes for a life of well being and joy.

Choose to make the voice that you give your attention to the ones that matter the most. Because in that choice is you deciding and that's your power!