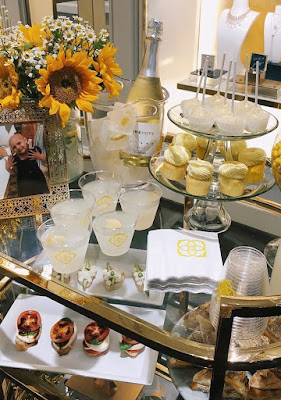 Curva-Lish became an e-commerce with Kendra Scott because not only does the company make incredible jewelry based right here in Texas but beyond that, social impact has been apart of the company from the beginning.

In other words, the Kendra Scott company epitomizes doing good business plus making an impact through its pioneering in-store charity fundraiser events.

And these aren't just some boring in-store shopping events.

The #KendraScottGivesBack events are replete with DJs, fabulous bites, photo booths, drinks and representatives from the designated charity to connect the purpose for fundraising with shopper dollars.

It is a winning formula that has allowed the company to his hundreds of fundraising events while donating thousands to worthy causes with 20% of sales proceeds donated.

Special Note: unlike most retailers that requires the designated charity to be an IRS designated 5013c, Kendra Scott doesn't have this requirement to have one of their in-store retailvarity fundraisers. Whether it's a national charity, a home town crisis, a local organization, or a friend in need, you can sign up for a fundraiser with Kendra Scott!


Posted by Curva-Lish at 9:48 AM
Email ThisBlogThis!Share to TwitterShare to FacebookShare to Pinterest