#CollectiveAmbassador: Are You Afraid of Success?

As I've written about before, I am an Ambassador with the Australian brand Collective Hub created by entrepreneur Lisa Messenger. The Collective Hub is a magazine and lifestyle brand leading a movement for "game changers, rule breakers, thought leaders, and Style makers challenging the status quo". 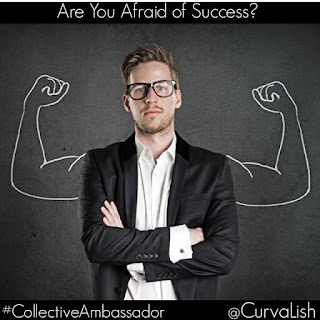 Loved this feature from Collective Hub about the fear of success...so inspiring (summary below):

Did you know that Dustin Hoffman co-wrote the 1979 movie Kramer vs. Kramer? No? That’s not surprising. It was a closely guarded secret. In fact, the actor only revealed that he helped write the movie shortly after his 77th birthday and that it was his decision to downplay his input. “I just have never taken credit for it – stupidly. Another one was Tootsie: my friend and I co-wrote the early drafts. He took credit. I didn’t want to. Rain Man was another one…"

It seems like a backward attitude in a fame-hungry culture such as Hollywood, so why wouldn’t Dustin want to be applauded? “I would say there was an element of self sabotage in me soon after I learned how to walk, which has never really left me." And he’s not alone in underplaying his achievements. Many entrepreneurs, creative and highly ambitious people are guilty of holding themselves back, and many don’t even realise they’re doing it. Although a certain level of modesty is a positive attribute, it can be a sign of a deeper issue.

The word sabotage can be defined as, “To deliberately destroy, damage or deconstruct something”, and when it comes to a person’s career path, it can show up in the form of procrastination, inattention to detail, or “extreme modesty”.

So, why do we do it? One theory is that many people find a certain comfort in ailure; it’s familiar, it’s stable, there’s no danger of disappointment. In his book The Big Leap, psychologist Gay Hendricks writes, “Each of us has an innermost thermostat setting that determines how much love, success and creativity we allow ourselves to enjoy.” The minute we exceed that setting – by making more money, experiencing more love, drawing more positive attention to ourselves, you trip your inner limit switch. A little voice inside us says, ‘You can’t possibly find ways to feel that good’ – so we find a way to feel bad.

The good news is there are ways to make peace with positive progress. It’s time to flip your mindset; instead of preparing for the worst try preparing yourself for the best. “I find that many of my clients deliberately hold back or draw in ‘bad luck’ if they haven’t consciously thought through the ramifications of what could happen if they do succeed, such as how it will affect their lifestyle, family, friends and even community,” says Annabelle Drumm, a career coach specialising in creative industries. “When embarking on a project, really visualise what the end goal would look like and how you can ensure it will bring you contentment. You need to be in it for the long game. I’ve found that a lot of creative people start off with all the enthusiasm in the world but abandon ship as soon as they reach the first obstacle, and embark on another project.”

See the rest of the article at Collective Hub HERE
Posted by Curva-Lish at 12:06 PM
Email ThisBlogThis!Share to TwitterShare to FacebookShare to Pinterest