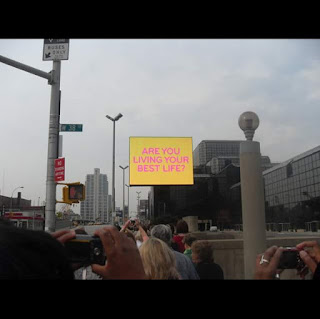 I received a Facebook flashback from this same day in 2010 (that included this pic) from when I attended Oprah's "Live Your Best Life" weekend at the Javitts Center in New York.

As I stood in line with thousands of other women still so deeply inspired by the previous day's opening ceremony of gorgeous decor and nonstop champagne, I took this pic.

Such a great reminder to us all.

Back in 2010 when I took this picture, I was in a job that I was miserable in but stayed because I cared about the other employees. Eventually, I started developing severe stomach ulcers from the stress (from near constant mergers and acquisitions and board meetings) and unhappiness in that job. And I was still grieving the loss of my Mom.

This O Magazine sponsored weekend helped me to start making the choices I was initially too afraid to make.

It's six years later and I still get so much inspiration from this simple question..."Are You Living Your Best Life?"

Don't be afraid of the answer...if I can do it, I promise you...so can you! It doesn't have to be related to leaving a job. Just listen to that quiet inner voice telling you what's holding you back from answering Yes to this question.

I'm still afraid some days as a girl boss entrepreneur but for the first time in my life, I can answer "Yes!" to this question!

And that's what really matters...blessings y'all.
Posted by Curva-Lish at 6:56 PM
Email ThisBlogThis!Share to TwitterShare to FacebookShare to Pinterest