Never Give Up: A Story About Meryl Streep 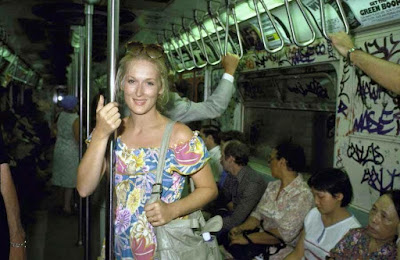 Meryl Streep - this is her on her way home from an audition for King Kong where she was told she was too "ugly" for the part. This was a pivotal moment for the young actress. This one rogue opinion could derail her dreams of becoming an actress or force her to pull herself up by the boot straps and believe in herself.
She took a deep breath and said "I'm sorry you think I'm too ugly for your film but you're just one opinion in a sea of thousands and I'm off to find a kinder tide."
18 Academy Awards later
Never give up on your dreams...
Posted by Curva-Lish at 8:12 AM
Email ThisBlogThis!Share to TwitterShare to FacebookShare to Pinterest